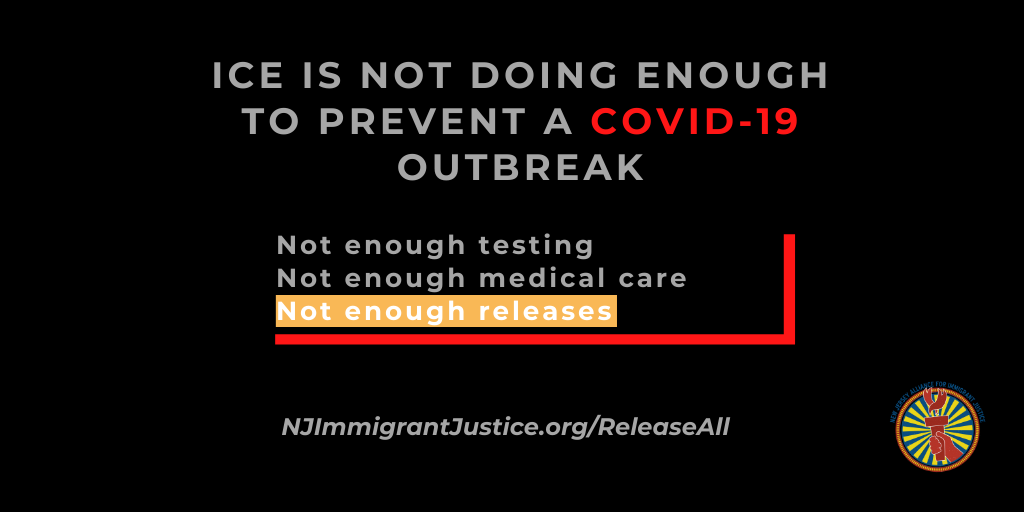 Right now, detainees all across the US are afraid of dying behind bars waiting for their day in court but immigration courts are closed due to the COVID-19 crisis. Still, ICE detention facilities continue to put detainees, incarcerated, and the American public at risk of a COVID19 outbreak.

On May 6th, Carlos Ernesto Escobar Mejia, a 57-year-old man, in ICE custody at Otay Mesa Detention Center in San Diego died due to COVID-19 related complications. People detained in New Jersey and immigrants’ rights advocates are intensifying calls to ICE, CoreCivic, and New Jersey state and county officials to release all detained in jail and ICE facilities immediately. Mr. Escobar Mejia’s early and preventable death from COVID-19 illustrates ICE’s wholesale failure to protect the lives of the men and women whom it is detaining during the unprecedented COVID-19 pandemic. This includes the staff and officers working in these facilities. On May 10th, Zeb Craig, a correctional officer at Hudson County Correctional Facility died due to Covid19 becoming the fifth Hudson County correctional staff who has died due to the virus and many more who have tested positive.

Mr. Escobar Mejia was a brother, uncle, and community member whose family is devastated by his tragic loss after he contracted the virus in the ICE detention facility. While Mejia’s death is the first known case of a COVID19-related death of an immigrant detainee, it will not be the last.

The sparse data provided by ICE and county officials shows that testing is vastly inadequate. Out of the over 900 people detained by ICE in New Jersey, only a small portion appears to have been tested with a reliable test.

ICE is not conducting adequate testing or contact tracing exposing once again its failure to act to protect human life and public health. Advocates are calling for the immediate release of all detainees due to the lack of proper safeguards to prevent the spread of the deadly COVID-19 virus.

Tell ICE officials, county officials, and private detention officers to protect the American public health and the health and well-being of detainees and those incarcerated by adequately testing and releasing all. Click through the link below to take action on each set of officials responsible for the people detained in these facilities.

Demand Bergen County #FreeThemAll by releasing all detainees in their facilities. Tell Sheriff Anthony Cureton to release all detainees

If you are unable to automatically connect with any official through the above links, please dial them directly at the numbers below. When you are ready, open the call script here. 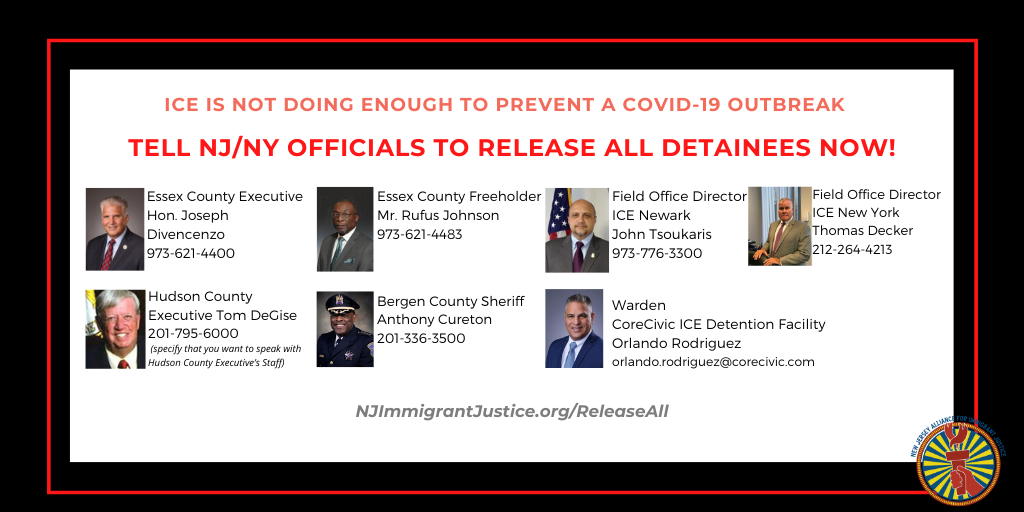 Please share the actions with your network and tell them why it's important to you.

If you take action, please let us know how it went for you.