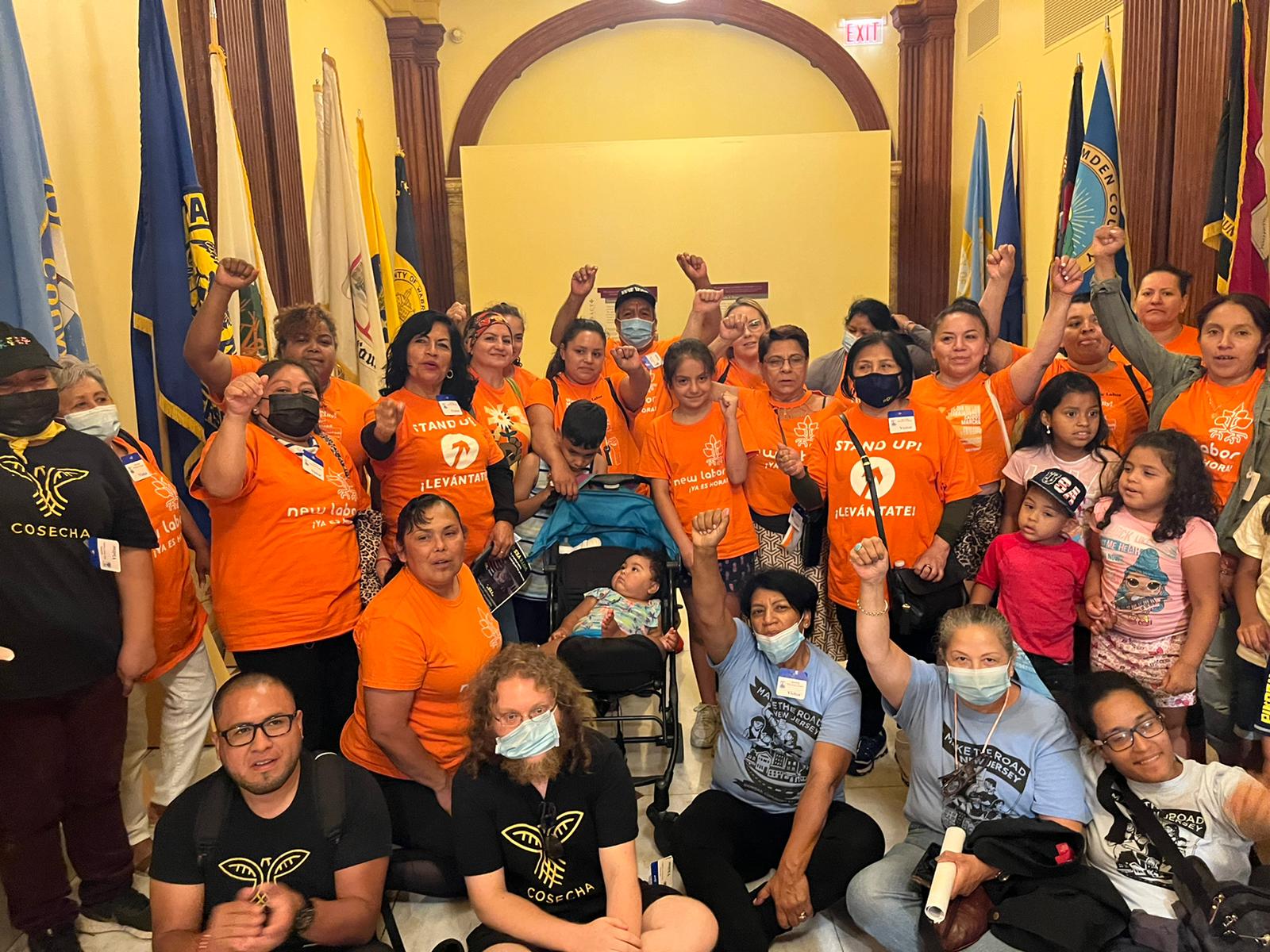 Pictured above: New Labor celebrating the Temp Workers Bill passing through the Senate in August 2022

"For me, in the role of an organizer, it’s about getting behind people and pushing them to be in the front. It’s about getting people to come to their own conclusions, it’s good to be on the sidelines and watch that happen"

"I’m Lou Kimmel, director and co-founder of the organization New Labor. We educate organizers to fight for better conditions for work. We have centers in Lakewood, Newark, and New Brunswick. We have mostly low wage, Latinx and immigrant workers as our members. We do things together that we can’t do on our own, such as learning English, fighting against wage theft, supporting different campaigns that can improve our different circumstances of work, and fighting for comprehensive immigration reform among other things. As a co-founder, I didn’t know anything about anything, and I’ve been learning from people along the way and members themselves. I was brought in to start an organization for people that didn’t have one. So in the year 2000, it was temp workers in New Brunswick. What people wanted was to learn English, so we actually started the organization around that, and lo and behold, it wasn’t just temp workers that wanted to learn English. So we created this space to build relationships and develop skills. Organizing through education is not just learning English to get ahead, but rather, if everyone is facing the same bad employers and bad landlords, we can build bonds of trust, connection, and identity in that space to help people move along, what we call, the ladder of engagement. We’re always about developing leaders, and a majority of our leaders come out of the membership itself. As for why we do this- what are the alternatives? Do nothing? For me, in the role of an organizer, it’s about getting behind people and pushing them to be in the front. It’s about getting people to come to their own conclusions, it’s good to be on the sidelines and watch that happen. Knowing your rights is not enough. If you don’t have the group behind you, it doesn’t do anything. Because of the difference in power, even if you know your rights you’re not always going to assert them."

Some of New Labor's current successes and campaigns...

"It’s not just New Labor, but the Temp Workers Bill at the state level is something that was founded around temp workers and we’ve been fighting for that for a long time. We work with Make the Road-NJ on that as well. It’s almost a victory- it’s gotten to the point where we just need Murphy’s signature. It creates the right to know, in writing, about where to go for worker insurance, pay raises, equal pay, pay transparency, and more. It allows you to not have to pay the agency provided transportation that comes out to around $2,500 a year which could be going to the local economy. We actually had a case back in 2015 where a temp agency was misclassifying their worker comp, so the state froze their assets and people were out of pay for about eight months. This is about getting rid of the bad actors and working to improve the ones that are hopefully trying to do the right thing. We’re trying to cut down on wage theft, unsafe working conditions, vans that are too crowded, harassment, discrimination, favoritism- you know, it all happens and it’s all part of the system. So this is just one tool to improve the situation. We’re also fighting for a Domestic Worker Bill of Rights, which is also for more transparency and written contracts. Locally in Lakewood, almost 10 years ago, we passed the first resolution in support of a local campaign which is born out of the workers’ reality there. You can’t legislate or regulate respect on the job, you have to demand it."

Lou on why it's important to center communities as a whole...

"For us, we try to look at everything more holistically, so we focus on workers first, and a lot of them are Latinx immigrant workers. But they’re part of communities also. So let’s say, community health- improving conditions for health is about improving it for everyone. If we’re creating safer workplaces, we’re creating it for everyone, regardless of who they are or where they’re from. At the end of the day it’s about improving conditions for everyone and making New Jersey a better state."

As we approach Labor Rights Week, what does that mean to you personally as part of New Labor?

"For a lot of these things, we shouldn’t be reducing them to a week or a month, it’s obviously a year round thing. And workers are beyond just a 9-5 or 11 p.m.-to 7 a.m. shift. They are parts of communities outside of that, so it’s important to symbolically remember the contributions of workers, in particular, unions that won things through bloodshed and strikes. At the end of it, there are still state laws and problems that happen. It’s not just a day for having a picnic and remembering the past, this is about the present. It’s not just US Labor Day, there’s also May Day, which is the international labor day. It’s an ongoing thing, so obviously we’ll have the public’s attention to think about work issues, just like we think about poverty around Thanksgiving and Christmas time. But it doesn’t just disappear just because it’s around those days. One of the things we’re fighting for is the Protect NJ Workers Coalition which is born out of our own reality. You know, asking how much safer are we after the pandemic? We saw people at Amazon facilities in Illinois and people at the Kentucky candle factory forced to work when tornadoes were predicted to come, and they died. It could’ve been different had they had an organizing space to say  “No, we’re not going to work today because our lives are at risk”. We see the need to have health and safety committees for all, and we’ve worked with other organizations to collect surveys and hopefully have an event in September to highlight the needs in those surveys."

Why wins by and for immigrants are essential...

"The people that are involved are the ones that need to be striking the blow. We’re not trying to push anyone, we want people to realize their own potential. Change doesn’t come for a price or a paycheck- people have to want it. Stuff doesn’t happen on a policy level just because a politician woke up one day and said “I have this great idea”. It’s a result of many actions, tactics, and pressure in order for them to take action. It might take a while but it does help to hear straight from workers about their stories and why it’s going to help New Jersey as a whole. The ones that are going through it will tell that story. It doesn’t need to be me, I don’t live that reality. They have their own voice and can tell their own story. It comes down to understanding service and justice versus charity. What is the role of people, advocates, and organizations? Not to say that you can’t have social services that fulfill needs, but it’s not just about giving out those services, it’s about building relationships and hearing what the issues are and mobilizing around those. It’s important to shift narratives. There’s a certain perception of what a nonprofit is and how they operate, but it’s not always the same. It’s also about looking past staff or the head of an organization, because it’s people that make things move; it’s not about supporting something just because one person said so."

Let's say I want to get involved with organizing in NJ's labor movement. Where do I start?

"First thing is to show up to the spaces and just listen. Even if you have ideas about what would and could work, you need to listen to what people want. What are their desires or dreams? From there, you can get involved as a supporter or member. For folks that are financially well, it’s about donating and for those that have time, it’s about making the phone calls and acting in solidarity with one another."

What’s something about you (a fun fact) that not many people know?

"I always answer the same thing, so people might know it by now. I’m actually 75-80% deaf in my left ear. I always use it for two truths and a lie! I’ve also broken the same leg twice during soccer. I’ve never played professionally, but I have played against Tim Howard in high school."

Lou's passions outside of work...

"Probably my family! That’s probably my top thing. My kids are 13 and nine. There’s not always time for it, so just creating that time to just be with them is important. And even though I don’t really play anymore, soccer. I play pickup games over the summer and fall, and I like watching the Red Bulls! Creating any kind of space where I can turn off any distractions is great, and for me that’s being in the woods and mountains."

Check out New Labor and what they're up to here!