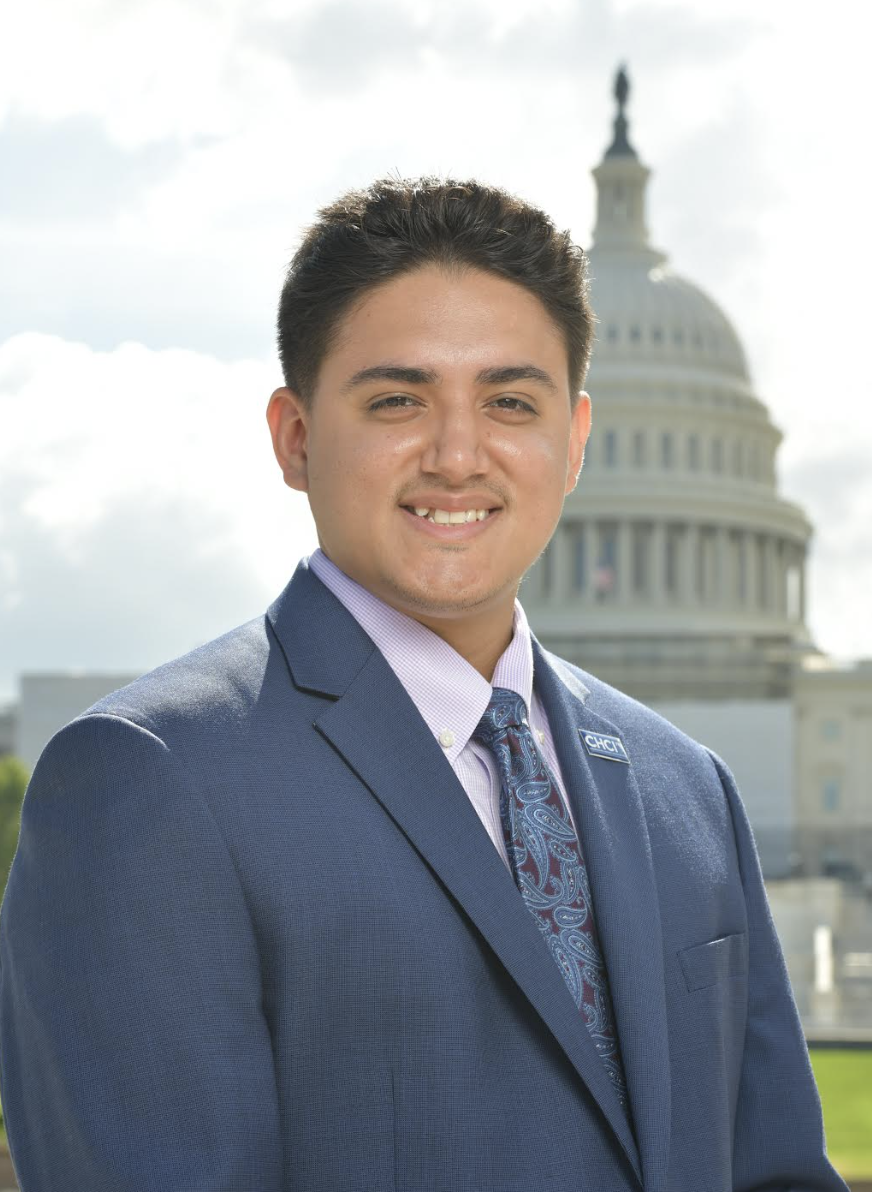 "My name is Johan Mora Valverde and as the SPAN youth coordinator, I came into the organization about two years ago. My main role is to support, design, and create initiatives to connect with youth and young adults with disabilities. We do that through weekly chats, our blog, webinars, conferences, self-advocacy, and things of that nature. I do it because I’m a young adult myself, as well as an uncle, nephew, and sibling to individuals with disabilities, so these are my life experiences that I bring onto the job, so it’s all shared between personal and professional work."

"I can speak on two levels: the work that I do, and the work that SPAN as a whole does. I work on the Youth Chats and Blogs, which started around when I came on, around two years ago now in 2020. These are initiatives that welcome youth and young adults, and we’ve had over a thousand attendees join these chats over these two years. We also started a blog to talk more about these chats, where we talk about advocacy, youth empowerment, and how you can get involved with New Jersey state services for individuals with disabilities. But we’ve also expanded to professionals across the region, because SPAN is a parent center, so the Office of Special Education and Programs, which is part of the Department of Education, provides funding for a parent center in every state and territory. We’re divided into regions, so we’re part of Region A, out of 26 regions. We’re also the lead of that region and team, so we expanded the blog to different parent centers, and we have subscribers from all across the nation, to which we’ve seen incredible successes there. We have at least 400 monthly visits to our blog! For SPAN as a whole, we’re celebrating successes that we’re seeing in the process. So right now, with the 2023 Appropriations Bill and the federal government, the President’s budget has called for a 50% increase in funding for parent centers that currently receive $30 million. Overall, this could mean an increase of around $250 thousand to SPAN and the work that we do. This language is present in both the Senate and House version, so we’re definitely moving in the right direction.

Another thing that we’re working on is the National Defense and Authorization Act, which is thanks in large part to SPAN staff, Peg Kinsell’s, advocacy (More about this Act can be found at the end of this interview). This is historic because they set up a competitive grant modeled after the parent center language in the Individuals for Disabilities Act. This is important because for every military installation in the country, it must include IDEA language that we use in parent centers. This means supporting military families in their own journey with their youth or young adults with disabilities, which is all new, historic funding that they’re bringing into the Department of Defense."

How Johan works to build inclusivity across the many demographics of New Jerseyans who use SPAN as a resource...

"SPAN, being the only designated parent and training center in NJ, has a responsibility to bring in funds from the Department of Education into our families. The primary goal is to support not only individuals with disabilities, but focusing on what that looks like to these individuals. We can’t pick and choose which families we work with. In New Jersey, we have communities of mixed backgrounds, indigenous communities, people of color, communities where language access is an issue, and they’re only growing. So as SPAN receives these funds, we have to meet the communities at their needs, wants, and support them in their strengths. And we can only be inclusive and accessible if we’re living up to that goal and mission that we set out to do. Not only is it important for us, but it’s important for any organization to be representative. One of the many things we do is host a Warm Line at our organization for technical assistance. We encourage families to call in, and we have staff all over New Jersey in every county. Some of them sit on boards of education, on the ground for different projects, work on our maternal and healthcare grants, and more. These services primarily affect immigrants, and as an immigrant myself, that’s how I got involved with SPAN. Our organization is to allow families to take advantage of these resources that are offered. And actually for the first time ever, we received funding from the NJ Dept. of Labor for our efforts at SPAN."

As the school year is in full swing and school can be considered a safe haven for many, creating an equitable and safe environment means...

"For me, as a youth coordinator, it’s not just about making sure these youth and young adults are in school, but also in jobs. When we talk about school, we have to ask ourselves, ‘What does that come with’. We have these individuals looking for the next step at a transition age. We have students with disabilities who are 14, which is important because from 14-18, they’re going through the last four years of school, and they need to know if their IEP (Individualized Education Program: a legal document under United States law that is developed for each public school child in the U.S. who needs special education) helps them after they’re 18. Because of the pandemic, many of these students might be aging out of the school system and might not have had the opportunity to be part of this program, and don’t know where to go. As an alternative to this or guardianship, where a child transfers all of their rights to a guardian, we teach supportive decision making and teaching students how to handle their own IEPs, instead of handing over all control to an adult. However, it’s off putting when these conversations don’t include the youth. Their way of communicating is their best way of communicating, so they should still have a voice in the process."

Risk factors for BIPOC and immigrant children are higher than most, especially when it comes to mental health. How does SPAN address these issues with your work and resources?

"Mental health is still at a crisis. Although we’ve gotten to the point that we don’t see it in the headlines as much, it’s still happening. We see it through our Warm Line. We get a lot of calls from parents and families, and there’s always a mental health component. It doesn’t get easier when schools are struggling to bring these services in, especially in the immigrant community. On my end, we try to bring in organizations that already have nationwide initiatives. For example, we brought in ASAN, which is the Autistic Self Advocacy Network, and they do a lot of work to empower these individuals on mental health, as well as bring in professionals to strategize programs in schools and communities. We brought them on to speak with our Executive Directors, talk to students, and be in our Youth Chats and Blogs.  A lot of these initiatives can look like just putting resources out there, not only what self-care looks like, but what is the NJ Department of Health doing? New Jersey has a lot of resources on the NJ Youth page by county that lists where you can go for health care, clinics that are available, and more.

The staff isn’t just reaching out to these communities, we’re part of these communities. I live in Newark, NJ, but was raised in Plainfield, NJ. So not only am I here, but I’m also a student, a resident. I’m bringing my work into the community because I’m from the community. That’s how we’re bridging that gap."

Johan on why it's important to have wins for the youth, by the youth, and how that changes the implementation of initiatives in the long run...

"At SPAN, a colleague of mine and I have started an initiative called “Advocacy Stories: By Youth, For Youth”, which is a playlist on YouTube where we invite youth and young adults who have gone through IEP meetings, their state’s systems for individuals with disabilities, who have advocated for themselves, and who have been in situations where there was no one to help them, and we recorded their story. Not only did we record it, but we tied a resource to what they were sharing. These are life experiences, and you can’t really go through a campaign or help communities if you don’t have a story yourself to share. They are the experts of their own experiences. Not only should these resources empower families, but that these families are directly brought into the communities. And as I said before, our SPAN staff is representative of our communities. Everyone on our staff is a parent, a sibling, or has a relation to someone with a disability. So we are not only leading campaigns for these communities, but as a part of them, so the work affects us. It goes in a full circle, especially when focusing on youth and young adults like myself. Although we believe in allyship, we believe that we should have someone in the room who’s been in the room for many years beforehand, supporting us."

One of Johan's passions outside of work is...

"One of the things I’m passionate about outside of work is higher education! SPAN works mostly at the point that stops before higher education, because the IEP process happens during your transition age, but while there are some initiatives for college students, I’m passionate about higher education and getting financial aid to individuals with or without documentation. I lived it. I’ve gone through an Associates, Bachelors, and am now starting my Masters, and I did all that by myself. As a first-generation student, you have to do it all yourself. In my own way, I share resources online to my friends, family, and siblings to let them know that there’s a lot of money here, or programs like Rutgers-Newark’s RU-N to the TOP, where just graduating from a New Jersey high school can get you a certain amount of money!"

Check out more from SPAN below!

Youth in the Know

More about the US Senate Bill on IDEA:
The US Senate bill on funding IDEA includes a $15 million increase for parent centers, while the House bill includes a  $10 million increase. A conference committee will meet to come up with the final number, which will then have to be passed by both the House and Senate. Hopefully, they will at least meet in the middle! The current Parent  Center program budget is $30,000,000; the President’s budget called for a 50% increase, to $45,000,000 (which  could mean an increase of $250,000 to SPAN). The Senate version is consistent with the President’s proposal, while the House version called for an increase to $40,000,000 (this could mean an increase of $167,000 to SPAN).
National Defense Authorization Act: Thanks in large part to SPAN staff Peg Kinsell’s advocacy, the National Defense Authorization Act includes language requiring the Secretary of Defense to set up a competitive grant program, modeled after the Parent Center language in IDEA, to support the Exceptional Family Member Programs (that assist military families who have children with disabilities), for every military installation in the country. This language is in both the Senate and House versions of the bill, so we are optimistic that it will remain in the final bill. There would initially be a pilot program that would fund one Center for each of the branches of the Armed Forces as well as one for a joint base (which is where our Military Family Support 360 program is housed.)
New Year, New Team, New Session | Same Fight for Justice
Do you like this post?
Tweet
Stay Connected Take Action Donate