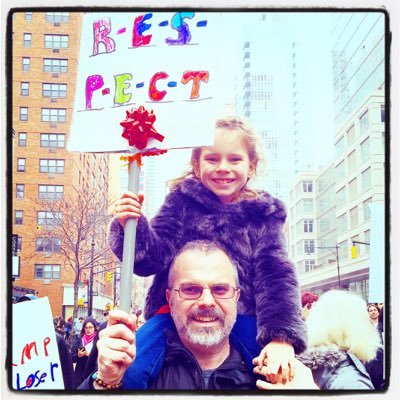 “In New Jersey, we have a richer diversity of immigrant communities than in most states…New Jersey can be a leader in just immigration policy, and it starts with prioritizing that immigrants live thriving lives in our state.”

Alain's background ranges from philosophy to the music business and academic book publishing industry, but it was the 2016 election that pushed Alain to become more mindful about various immigration issues, especially at the local level. “There has always been this nativist, xenophobic and demogogic discourse happening in this country, but it wasn’t until 2016 that it was truly in my face.  After the election, my wife and I were stunned. I knew I couldn’t spend the next four years just shouting at the television screen while people's lives were being impacted. We decided we would begin volunteering with a resettlement agency.”

Alain’s work with the resettlement agency included folding bed sheets, setting up apartments for refugee families, and serving as an English Language teacher. One experience resonated with Alain. “I was helping set up an apartment for a refugee family that had arrived from Eritrea. It was a couple and their six year old child. My daughter was six years old, too, and was volunteering with me. We decided to personally meet the family for some coffee. While we couldn’t exactly communicate due to language barriers, our children had no problem playing together. Our families got to know each other and learned how to communicate as best we could. Since that experience, I have never looked back.”

Prior to 2018, many individuals Welcome Home Jersey City (WHJC) served were refugees. That all changed when the resettlement program in Jersey City was suspended, leading the organization to serve asylum seekers, asylees and undocumented immigrants. Alain shares what brought the organization to the NJ Alliance for Immigrant Justice (NJAIJ). “Because of our shift in the population we started serving, I became drawn to NJAIJ. I wanted to learn more about immigration policy and the lives of undocumented immigrants in New Jersey. I wanted to understand the programs and services that undocumented immigrants were entitled to, the barriers they were facing, and how WHJC could best serve this population locally.”

WHJC serves refugees and asylum seekers from across the world. “Many people we have met through WHJC are from the Middle East, North Africa, and East Africa. We have always supported Afghan SIV (Special Immigrant Visa) holders. In 2018, as we started working with more asylum seekers, we began meeting people from West Africa. They were being released from immigrant detention centers in New Jersey. As a result, our work started converging with anti-detention and immigrant justice organizations.”

WHJC work has evolved over time, from first helping set up housing for refugees, then connecting the community to education and employment opportunities. Today, WHJC is tapping into advocacy issues impacting the communities they serve. “WHJC is advocating for the Afghan Adjustment Act, which would benefit Afghan parolees. Currently, parolees do not have a pathway to citizenship, unlike refugees or SIV holders. Humanitarian parole only lasts a year. Once that year is up, they have to apply for asylum, which requires people to undergo a repetitive process. The Afghan Adjustment Act would put all Afghan parolees on a pathway to citizenship. We also advocate for the release of community members held in detention centers into the care of their community and community organizations, rather than being shipped off to a detention center in another state. We call for releases not transfers, just as other organizations have been amplifying across the state.”

Outside of their advocacy efforts, one of WHJC’s popular programs is Fun Club. “Every week, WHJC convenes the community for our Fun Club program. We help children with their homework and get them exposed to different activities, like dance and crafts. Simultaneously, we help parents on specific projects, like English classes for example. We then eat together in community. To be honest, I think we are more known for pizza than anything else!”

Alain has met a multitude of people and has had the opportunity to hear their stories. One story in particular resonated with Alain. “In 2019, WHJC held an event to commemorate World Refugee Day. At the end of our program, a refugee woman spoke up to tell her story. She had migrated from Syria to Thailand, where she was told that she could make her way to the United States. With her was her husband and her four children. News came that her two adult children would have to apply for refugee status separately. She had to make a decision: head to America with only her two youngest and her husband? Or wait, so that her family stays united, but with no guarantee that they will make it to the U.S.? She had to make the hard decision to leave behind her two adult kids. Life for the two adult children was hard in Thailand. They didn’t have legal working status in Thailand, which led them to be detained and imprisoned.” Alain shared that once the woman finished her story and asked for help in reuniting her family, a man in the audience spoke up. This man turned out to be related to the former chief of police in Bangkok, Thailand. He was able to contact the former chief of police and get the children released from jail. Alain reflects on this experience. “This story is not just a wild coincidence. It shows the difficult decisions and the hard journeys that people must take as refugees, as well as the power that advocacy and speaking up for change has.”

To Alain, achieving policies in New Jersey that welcome and support immigrants is important. According to Alain, “immigrants bring so much value and richness to this country. Immigrants also bring a spirit of entrepreneurship, which is one of our main drivers in our economy and in our communities. America has always been a country of change and reinvention, which immigrants amplify. In New Jersey, we have a richer diversity of immigrant communities than in most states. Our State Legislature and Governor have a chance to support immigrants by passing laws that empower our communities and keep them together. New Jersey can be a leader in just immigration policy, and it starts with prioritizing that immigrants live thriving lives in our state.”

As the holidays approach us, Alain asks readers to broaden their understanding of home and family. “At WHJC we try to broaden the meaning of family and home to be more than just the people and place you return to at night. Family and home is our community that makes us feel safe. What can we bring to our community to ensure that we all feel safe? We have the responsibility of creating that sense of home and family for 85,000 Afghan refugees arriving in the United States. I can see Jersey City being home to dozens, even hundreds, of newly arrived Afghan refugees. And WHJC will be here to support them.”