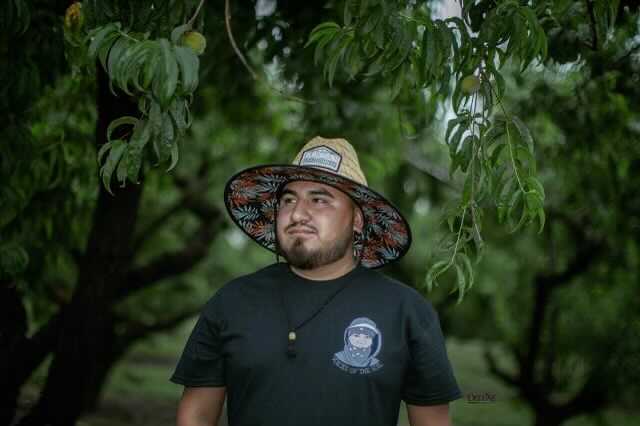 “Everything that people eat everyday, especially on Thanksgiving, is picked by a farmworker. Everything is produced by an agricultural worker. Everything is picked by essential hands that are not paid any attention to. Essential hands that have been through severe cuts, coldness, pesticide poisoning and much more. Hands that are not valued, but should be since they feed everyone.” -- Edgar Aquino-Huerta, Farmworker Organizer, CATA

Edgar was born in Puebla, Mexico, then migrated to the United States at a very young age. Edgar became an advocate a few years ago. He saw how his immigrant community was excluded from public programs and the impact that the COVID-19 pandemic had on his community. He saw the work CATA was doing in the community and was very impressed. He eventually joined CATA: “CATA does a lot of things. We do outreach on the farms to do pesticide trainings, facilitate health and safety trainings with the farmworkers so that they can navigate their work spaces, and outreach for the new driver’s licenses law. Not only do we try to build knowledge among the farmworkers, we also get them involved in advocacy efforts, like raising the minimum wage. Many people make below the minimum wage, even after working on the farms for over 20 years. We fight with them to improve their lives.”

For the past five months, Edgar has worked with community members to get them ready to apply for the driver’s licenses law. Edgar has been able to assist 45 community members start their driver’s license process in New Jersey since May, securing 11 of those members with their actual license: “I get calls sometimes from community members saying, ‘Hey, I got my license in the mail! Thank you so much’. I live for those moments. It’s another weight taken off their shoulders because they can drive with a little less fear on the road”. Edgar also shared that the most important thing about the work he does with CATA is building the confidence amongst farmworkers: “I do not come into their spaces and act as if I’m the professional. I get to know them as people. I learn about their experiences and what moves them. I try to console them when they are fearful about their situations. I try to give them animo, courage, to move forward because there are people advocating for them”

Many of the community members that Edgar works with are Mexican immigrants and Central American immigrants who work in the agricultural sector of south Jersey with certain lived experiences: “Many community members I work with do not have any form of documentation. This prevents them from applying for programs, like driver's licenses. I see that community members have been discouraged. They fear losing their jobs, or getting hurt on the job. But I also see people who fight for better. I know one community member who advocated for the driver’s licenses law since the very beginning. Today, he has his license and gets people involved in organizing campaigns.”

Edgar says that CATA is involved in various campaigns: “CATA works with the Let's Drive NJ/Driver’s Licenses for All campaign to ensure all community members, regardless of immigration status, have access to driver’s licenses. CATA also works with the Recovery For All coalition to advocate for the Excluded New Jerseyans Fund (ENJF). We also have community gardens and have weekly market days where community members can get fresh produce. CATA has three offices in New Jersey, Pennsylvania and Maryland. Each office does different things, but very important work.”

Edgar says that there are many ways for people to support CATA’s work: “People can visit the website to learn more about our initiatives. It would be very helpful if people share our Facebook updates, and join our community meetings every month to update the community with news that support immigrants. Also, any information that would be helpful to our community, please share! The more we educate the community, the better.”

One day, Edgar searched up his last name and found millions of google searches on Dolores Huerta. As he researched her, he found out how her advocacy efforts to better the lives and working conditions of farmworkers: “Sometimes I tell people that Dolores Huerta is my grandmother since we have the same last name. I like to believe we are related in some way. I didn’t know people like her existed, and definitely didn’t know I would do similar work as her in the future as a farmworker’s organizer. I would think about her all the time when I used to work the fields in the summer. I would stand up to oppressive bosses and stand up for my fellow workers because I knew that Dolores Huerta would do the same. ”

Thanksgiving is around the corner, and often Farmworkers and other agricultural workers are not acknowledged in the food system. One thing that Edgar would like people to know about the lives of farmworkers, is that “everything that people eat everyday, especially on Thanksgiving, is picked by a farmworker. Everything is produced by an agricultural worker. Everything is picked by essential hands that are not paid any attention to. Essential hands that have been through severe cuts, coldness, pesticide poisoning and much more. Hands that are not valued, but should be since they feed everyone.”

Edgar shares what brings him joy, and how he wishes to use his talents to further the farmworker rights movement: “I have been writing my entire life. I like to write about the world, but in a creative way so that people can picture it in their heads. I am also a videographer. I come from a low-income family, so we didn’t have money to buy cameras as a kid. When I got my first camera in seventh grade, I would direct videos with my cousins and upload them to YouTube. I eventually worked on PSA’s for my high school, and my work has developed greatly. I now want to document the lives of farm workers by creating cinematic testimonials from our community members. I want to capture how farmworkers feel, and what their experiences are like”