Newark, NJ --The New Jersey Alliance for Immigrant Justice (NJAIJ) and member organizations applaud the passage of A5207 in the Assembly on Monday, June 21st. NJAIJ, a state-wide coalition of 44 faith, labor, policy, community-based, and grassroots organizations, has fought for A5207 as part of their “Fair & Welcoming Platform” to ban new Immigration and Customs Enforcement (ICE) detention contracts, including renewals or expansions.

The coalition’s celebration of the Assembly’s momentum is met with caution as the Senate’s companion bill S3361, which was assigned to the Senate Budget & Appropriations Committee, has yet to be scheduled for a vote. Over 40 leading immigrants rights and justice organizations sent an endorsement letter to State leadership on Friday urging swift passage. Yet as the Senate bill stalls and the summer recess nears, advocates and families fear that New Jersey will be open to new business with ICE, even as multiple local and county contractors have indicated a willingness to close or wind down existing agreements.

“Despite leading the nation in our diversity and percentage of people with immigrant heritage, New Jersey is alarmingly slow to put an end to ICE collaboration. Without this legislation becoming law, a new ICE agreement can crop up at any time. No resident should fear for their safety because local contractors take dirty money from ICE. State leadership must take their cue from the sea of change at the local level and pass S3361/A5207 immediately,” said Amy Torres, Executive Director of the New Jersey Alliance for Immigrant Justice.

As recently as last October, ICE solicited interest from entities in New Jersey and New York to greatly expand detention capacity in the region, with the proposed creation of 900-1800 new beds. A similar request was issued in the Philadelphia field office, potentially affecting South Jersey. NJAIJ members continued raising the alarm, commenting:

"The passing of this bill exemplifies all of what makes New Jersey great. As a state filled with immigrants, we are taking a strong stance against their detention. People detained inside call me regularly in fear that they'll never see their loved ones and wonder why they have to face this 'just because we were born in the wrong country.’ To them, this bill means a lot more than we can imagine," said Banan Abdelrahman, Campaign Coordinator with the American Friends Service Committee Immigrant Rights Program.

"We applaud the Assembly for recognizing what we've known all along - that there are tremendous human costs and incalculable harms brought about by detention. The Senate must act now to prevent any future deals with ICE that would continue to separate families and cause lasting trauma in our communities,"said Lauren Herman, Supervising Attorney, Make the Road New Jersey.

“Immigration detention causes trauma and harm to families and communities across the country, and New Jersey can take action now to begin to end its complicity in this cruel and inhumane system. We thank the Assembly for passing this vital legislation, and urge the Senate to swiftly take action and pass this bill,” said Ami Kachalia, Campaign Strategist with the ACLU-NJ

“Faith In New Jersey commends the NJ State Assembly on the recent passage of A5207 which will move our state closer to ending the inhumane warehousing of human beings who come to this country seeking opportunity and freedom.  We call upon the NJ State Senate to add their votes in support of humanity and decency to pass S3361.  We look forward to supporting and working with those who honor the image of God that is present in all human beings, regardless of their national origin or citizenship status," said Rev. Barry Wise, Faith in New Jersey Board Member

“We are happy to see that the majority of the New Jersey Assembly voted to end future ICE detention centers in NJ. This issue is urgent now because ICE wants to open new facilities here. Given the urgency, we are disappointed that the Senate has not moved the bill, which costs the state nothing, through its Budget Committee. Schedule and pass S3361 now!,” urged Ellen Whitt, Central Jersey Coalition Against Endless War

Prime Sponsor of the Assembly bill issued the following comments about today’s vote:

"The treatment and politicization of immigrants and their families under the Trump administration was shameful, inhumane, anti-American," said Assembly Speaker Pro Tempore Gordon Johnson, author of this legislation. "We are a nation of immigrants and New Jersey, to this day, is a state that prides itself on being a true melting pot of peoples, cultures, and creeds. There is simply no place for the detention of people merely on the basis of their immigration status in this state. Thank you to the members of the Assembly for passing this legislation, and thank you to the New Jersey Alliance for Immigrant Justice, for your tireless advocacy for our underserved immigrant communities."

They were joined by their colleagues in celebrating today’s win:

“I salute the Speaker for posting the bill and my General Assembly colleagues for passing this legislation that will allow New Jersey’s immigrants to feel safer in their communities in keeping with our values as a state,” said Assemblyman Raj Mukherji, co-sponsor of the legislation. “We should be celebrating our diversity and immigrant neighbors, including young students and parents and siblings of uniformed service members, rather than uprooting and separating them from their families and communities and subjecting them to detention simply because of their immigration status.”

"This is a positive step forward for our state. I am thankful to my colleagues who voted in support of this vital piece of human rights legislation, and for the advocates who have worked to make this happen. This sends a clear message: our criminal justice system should not be used for profit," said Assemblyman Nicholas A. Chiaravalloti, co-sponsor of the legislation. 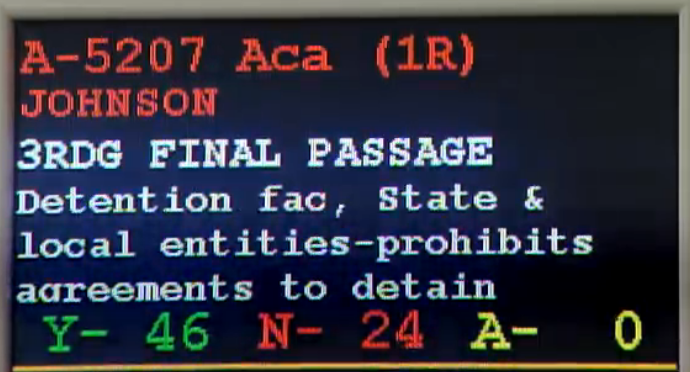 NJAIJ proudly stands with our members and legislative champions to call the State to swift action and ban future business with ICE.